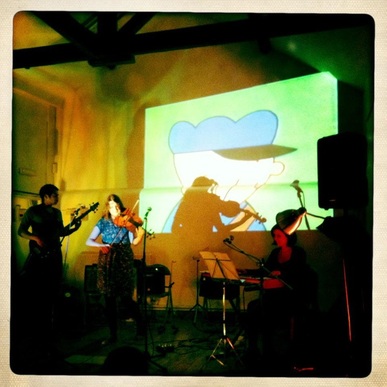 Inclement Quartet is the coming together of favourite times and places, a collection of eclectic sounds and spaces, from South Africa to Swaziland, Birmingham and beyond. With music written by Natalie Mason and Cara Stacey (original members of Inclementine, formed in 2011 in Cape Town), they were joined by Ebrahim Nazier and Sarathy Korwar in London town in 2012. The quartet plays music original and old, on piano, viola, voices, the South African mouth-resonated bow umrhubhe, the Ugandan budongo kalimba, vintage fan organ, drums, the Nigerian udu, percussion, and bass guitar. As recent Masters graduates from the School of Oriental and African Studies, the quartet builds on academic insights by exploring the challenges and delights of musically incorporating cross-continental creativity into contemporary sound. Both through-composed and improvised, Inclement Quartet’s music is characterised by beautifully textured instrumental layers and challenging multi-lingual vocal harmonies. Inspired and formed by the acknowledgement and reworking of a wide variety of genres and traditions, their influences range from Swazi bow songs, to Latvian psychedelia, and 1940s love songs, creatively reflecting the formative musical influences that make up the quartet. Regularly featured on Resonance FM, the band had their first outing with Club Integral in London and were invited that same week to perform at Islington’s renowned Union Chapel. Having recently recorded a selection of tracks, the Inclement Quartet will be releasing an EP later this year, recorded by Robert Murphy and featuring four original works by the group.

Cara Stacey is a classically-trained pianist and musical bow player from Johannesburg whose musical and compositional interests journey between southern African songs, classical music, to salsa, kizomba and beyond. She has performed with Neo Muyanga, Jason Singh, Juliana Venter, Galina Juritz, Joyce Moholoagae, and Shabaka Hutchings, amongst others. Natalie Mason’s musical life began in the womb with a kick at the climax of Shostakovich’s Fifth Symphony. Weaned on strange Sixties music in Birmingham, she is a multi-instrumentalist, composer and facilitator who spent several years working with music therapists in Cape Town. She has recorded and performed widely both in Britain and South Africa, in the Royal Albert Hall, at the South African FIFA World Cup and in the Latvian National Song Festival, with thousands of others singing folk songs in harmony. Ebrahim Nazier, originally from Mitchells Plain in Cape Town, made his bass guitar debut in 2009 with the Jeremiah Brimstone Band in South Africa. He works as an architectural technologist and is studying sustainability in Birmingham, England. Sarathy is a percussionist and composer, originally from Pune in India, whose motive is to draw from an eclectic mix of influences and in the process create a space which is his own, musically. Trained as a classical tabla player for the past ten years, he has studied with world class professionals such as Shri Rajeev Devasthali, Eric Stams, Bosco De Oliveira, Richard Widdess and Pandit Sanju Sahai.

On the quartet’s first meeting over a cup of tea in East London, Sarathy noted that one should always carry an umbrella in England, or perhaps it was better not to have one at all. In a country where the weather is inclement, we make music to remind us of sunshine in a faraway homeland. We hope that you hear it too.
Photo courtesy of Charlotte Pugh.
Powered by